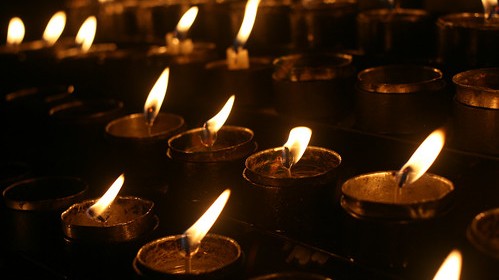 Editor’s Note: Terry Browder, founder of Sayles Ranch Guesthouses, posted the following reflection on Facebook in response to reactions to the coronavirus pandemic. It is reprinted here with permission.

We are experiencing some scary and uncertain times with this COVID-19 pandemic. We fear the unknown.

As I traversed the aisles of our local H.E.B. grocery store to obtain a few things, I observed as we have been hearing in the media, that many of the shelves that held toilet paper, bottled water, hand sanitizer, etc., were empty or nearly empty. The supplies were depleted. But as I walked up the aisle that holds the “prayer candles,” I found that there was still an ample supply. I am not Catholic, but I bought one. Let me explain.

In the summer of 1965, I was 11, and our family was in the midst of wheat harvest in Fleming, Colorado. I grew up on a wheat farm and after our own wheat was cut in Southwestern Oklahoma, we loaded up the combines and headed north. We custom harvested for farmers all along the eastern plains of Colorado and down into the Texas Panhandle. It was a sultry July afternoon when we rolled into Fleming, Colorado. We parked our equipment along side the road and my dad went to the local grain elevator to see about a cutting job. The dry land wheat there was just beginning to be ripe and it was a bumper crop! My dad immediately landed a job with a farmer who was unloading his grain truck. The farmer had an old Baldwin combine but he was making little progress and needed help to get his beautiful, chest-high wheat harvested before a forecasted storm came. We quickly began unloading the combines and hurried to his fields, about 15 miles south of town.

It was late afternoon and miserably hot, but the sky was clear–except for a tiny cloud on the western horizon.

Within a couple of hours, we had gotten started cutting some of the prettiest dry land wheat I had ever seen. What a crop! Mother had just brought supper to the field when a fearsome storm quickly developed from that tiny cloud on the sestern horizon. As it began to pour, the farmer yelled for us to all follow him to his house across the field. We dashed into his farmhouse where his wife and kids hastily beckoned us into their basement.

And it rained and hailed….a deluge.

It rained so much that they said the “crick” would be up, getting back to town would be impossible and we would be stranded there for the night. As is common on the eastern Colorado plains, their ancestors had come from Eastern Europe and they were Catholic.  I was 11, and we were Church of Christ, and I didn’t know any Catholics and had no knowledge of Catholicism except how scary John Kennedy and the Pope had been to my parents when he became president. This was my 11-year-old perspective.

But as we huddled in that basement where we had been generously offered Christ-like hospitality, we observed this family as they lit their prayer candle and crossed themselves and prayed…..as they lost their beautiful wheat crop.  (The next morning there was literally nothing left over ankle high of their chest-high wheat). We learned that they had been hailed out six of the last seven years….They had been devastated, and they had endured it in the presence of strangers who were Christians, but were speechless to comfort their loss. And the prayer candle burned. And we saw and understood in that candle what words could not speak.

We are living in a troublesome moment in our history. We fear we are facing loss.  Possibly devastating loss. I am speechless to offer much comfort or advice. But, may I humbly suggest, as you traverse the aisles of H.E.B. looking for toilet paper or hand sanitizer, that you also pick up a prayer candle? You don’t have to be Catholic to buy one. Take it home and light it. And remember that just like that farm family in eastern Colorado, it just might speak for you when you have no words.

Terry Browder is founder of the Sayles Ranch Guesthouses