OH, BROTHER, WHERE ART THOU?

Posted on December 22, 2019 by Loretta Fulton Leave a comment

Even novices in U.S. history know that discovery of our part of the world was made by Christopher Columbus in 1492.

On a far more personal note, Beverly Hindman–an 82-year-old widow in Burleson, Texas, has collected important “puzzle pieces” this year to greatly clarify her family history. Now, 527 years after Columbus landed, she’s made a discovery of her own. After thorough research, she has learned of an older brother, and several other new relatives. Her pilgrimage is at once heartwarming and inspiring. She and her 90-year-old brother, George Shepard, embraced for the first time ever when Bev and daughter Ruthie deplaned in Chicago last August for a week-long visit.

Retired owner of a highly successful Chevrolet dealership, he was an immediate participant in a REUNION worthy of capital letters! They shared enough family history to “tide them over” until they meet again early in 2020 at his winter home in Florida. That’s where he and wife Lorraine, 87, spend winters.

Something in them urged “forge on,” first and foremost being God’s Providence along the way. 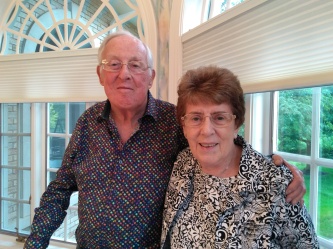 Beverly Hindman 82, with brother George Shepard, 90. Neither knew the other existed until this year. Photo contributed by Don Newbury

They don’t know if they had the same father, but they had the same birth mother, Clara Grousd, of Lithuanian origin. She was plagued with both physical and emotional disorders and said to be incapable of rearing children.

They have no memory of their birth mother, but Beverly remembers a single phone call from her 61 years ago. Nervous and rambling during the brief conversation, Clara mentioned having a son earlier, but wouldn’t provide a name or contact information. It was difficult to separate Clara’s truth from make-believe, so the claim was discounted.

Soon after Beverly’s birth, her mother saw an ad for a babysitter on Chicago’s Second Baptist Church’s bulletin board. As an infant, she was left at “babysitter” Bertha Reed’s home. Beverly’s mom didn’t show up again for a month. “Either take her or let me adopt her,” Bertha understandably demanded. Clara agreed, and that’s when Beverly acquired a new last name.

George was reared by a loving couple who wanted to adopt him, but couldn’t get his mom’s permission. The couple’s last name was “Shepard,” and that’s the name he chose. This explains the dealership name of “Shepard Chevrolet,” a firm he and a partner founded. George purchased his partner’s interest a year later, and operated the dealership for 36 years.

In a loving family environment, Bev attended the same high school where George had been eight years earlier. She completed nursing school, marrying Ralph Hindman, another Chicagoan, in 1960.  Some 17 years later, the family (including sons Mark and Steve and daughter Ruthie) moved to Fort Worth where Hindman worked in the chemistry field. He died in 1996.

Upon moving to Texas, Beverly received both her bachelor’s and master’s degrees in nursing from UT-Arlington in 1980 and 1982, respectively. She dreamed of teaching in the Tarrant County College Nursing Program, and served there for 22 years until her 2011 retirement.

Beverly began her genealogical quest by searching for her birth certificate a decade ago. The trail was long and winding, including tons of correspondence. At the final “stop,” a case worker for Illinois’ adoption registry provided much official information, including the name of Beverly’s brother, as well as contact information. Understandably, her mind is boggled. So is mine, and maybe yours, too.

Her friends at Burleson First Baptist Church are “abuzz” with news of Beverly’s familial discoveries!

Finally, we all are brothers and sisters in the family of God. No doubt, Beverly and George will have a Merry Christmas. Hopefully, you will, too!