Posted on June 8, 2017 by Loretta Fulton Leave a comment 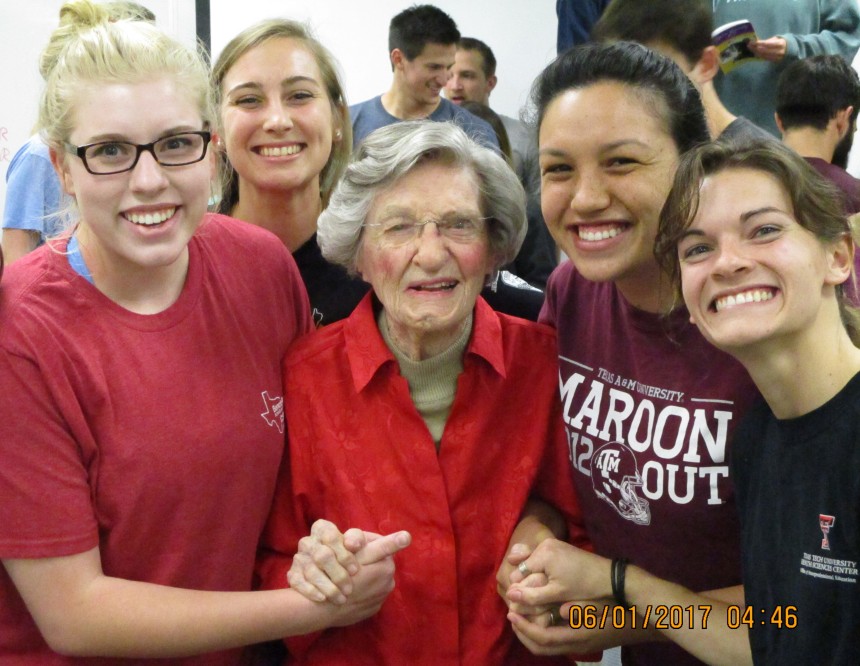 Dr. Virginia, a Hardin-Simmons University graduate and Abilene’s first female physician, is welcomed to an HSU physical therapy class by left to right, Allison Ball, Kelli Baker, Virginia, Laura O’Beirne, and Dani Kline. The students, who will go on a medical mission trip to Peru in July, heard Dr. Connally’s stories about her own medical missions. Photo by Loretta Fulton

Anyone getting ready for a medical mission trip to an international destination naturally would have some worries.

Knowing the language should not be one of them, according to a young woman who has been there.

And that is exactly what a group of Hardin-Simmons University physical therapy students and professors are getting ready to share and to experience when they arrive in Peru in July for a medical mission trip.

They will be led by Dr. Janelle O’Connell, director of the HSU physical therapy program, and her husband, Dennis, a professor in the program. Keelan is their daughter. During a recent class session, Keelan and her husband, Jonathan Camacho, spoke via Skype to the students who will be going to Peru. They live in the Washington, D.C. area.

“What you do there will change lives,” Jonathan said.

“We encourage you to be open to God’s will,” Keelan added.

A special guest for the class the day of the Skype interview was Dr. Virginia Connally, a 1933 graduate of Hardin-Simmons and Abilene’s first female physician. Connally, 104, served several medical missions to Venezuela when she was practicing medicine. Connally, lively as ever, talked about her experiences and answered questions.

Two days later, a group of the students visited Connally in her home, which she built in 1953. The class session and the home visit were mutually rewarding.

During the Skype interview, Keelan told the students that they would finally be leaving the classroom and would be experiencing the reason they chose physical therapy–to help people. She sounded very much like Virginia Connally with her advice.

“Trust God,” she said, “and he will make amazing things happen.”