DON’T WORRY; GOD’S GOT THIS

Posted on January 24, 2019 by Loretta Fulton Leave a comment

And then he began to talk and everyone understood why. Key annually gives a State of the World address to members of First Central Presbyterian Church, where he was a member when he taught political science at Hardin-Simmons University. He now is associate professor of government and international affairs at Sweet Briar College, located in Sweet Briar, Virginia. He addresses the audience at First Central via a visual telephone feed. This year’s version was held Jan. 23.

“I don’t recall a time, “Key said in his introduction,” when the world has seemed more unsettled.” 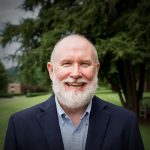 In fact, he said, it feels to him somewhat like the latter days of the Cold War. The difference, he said, was in those days patterns began appearing that foretold a positive outcome.

International norms of behavior are being ignored and international institutions aren’t as strong.

“This will be a dangerous year for the United States,” Key said.

Europe has never been in a bigger mess, Key said, than it is now with Great Britain, France and Germany all facing problems. The United States can no longer look to Berlin as a stable partner, Key said.

“All the major governments of Europe are under tremendous pressure,” he said.

Key intentionally avoided domestic politics, leaving it to the listener to decide whom to blame for various problems. A few weeks ago President Trump announced that he would be pulling U.S. troops out of Syria. It is a good time for the United States to withdraw from Syria, Key said, but didn’t like the way the announcement was made.

“It couldn’t have been handled any worse,” he said.

Key agreed with Trump’s assessment that ISIS, the Islamic state, has been weakened to the point of almost being extinct. However, the ideology behind ISIS won’t go away.

“It’s a poison that’s going to be with us for a long time,” Key said.

Moving on, Key said China is suffering from a demographics problem due to its one-child policy. The population is aging, he said, with not enough younger people entering the labor market. That will result in the end of a cheap labor market, Key said.

Key also expressed concern about the ramping up of talk about the militarization of outer space. Washington, Beijing, and Moscow are being too cavalier about the idea of a “space force,” as President Trump has called it.

Agreements need to be drawn up among various countries with space capabilities, and wisdom needs to prevail, Key warned.

“Diplomacy is absolutely essential at this point,” he said.

But all is not bleak, Key said. Some hopeful signs are the hardening of cyber security, the Navy is on the right course again after several high–profile missteps, and the U.S, is cultivating new security ties, notably with India. And, Key said, the United States is seeing problems more clearly and beginning to push back against countries that have been taking advantage of the U.S.

“We’re punching back, we’re pushing back,” Key said. “We’re not being patsies.”

As hopeful as Key was feeling toward the end of his talk, First Central’s pastor, Cliff Stewart, offered an even more hopeful prayer, a reminder that God is in charge.

“The world somehow is in your hands,” Stewart said in his closing prayer.