A TRIBUTE TO THE LEGACY OF MLK JR.

Posted on January 21, 2019 by Loretta Fulton Leave a comment

Martin Luther King Day was observed across America on Monday as the nation paid tribute to the Civil Rights Movement leader who was assassinated in Memphis on April 4, 1968.

Abilenians turned out, despite a fierce wind, to march across the MLK Jr. bridge on the east side of town. They carred a banner, flags, and signs in honor of the King’s legacy.

On Wednesday, Mayor Anthony Williams, Abilene’s first African-American mayor, will address the Abilene Association of Congregations about King’s influence. The public is invited to the meeting, which will begin with lunch at 11:45 a.m. at First Central Presbyterian Church, 400 Orange St. The program is free and the lunch is by donation.

Below are photos from Monday’s march. 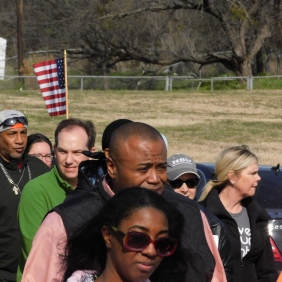 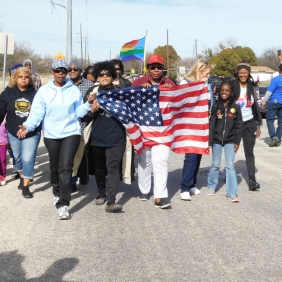