LABYRINTH IN THE MAKING

Many people have suffered from boredom and lethargy during the COVID-19 quarantine. My husband, Mike, and I, both retired for several years, had already adjusted our schedules for more home time than younger families who suddenly had to miss work and school. With the time and limitations associated with social restrictions, we undertook a major DIY project to fill our time.

Some people call me a perfectionist, but those people don’t understand that perfectionism exists on multiple levels. For example, when I want to hang a picture on the wall, I stand back and look at the space. I walk over and put my finger at the point I consider the middle, I tap a nail in, and I hang the picture. Voilá! Project completed!

In contrast, if Mike sees me with a hammer and nail, he immediately goes to his toolbox to retrieve the tape measure and leveling device. He measures not only the wall spaces but also the distances between frame corners before meticulously hanging my art work.

A little over three years ago we moved into a new home that has a massive backyard primarily made of West Texas clay that Mike calls porcelain because of its hardness. Grass will not grow in the desert-like area, nor is landscaping practical. Mike began thinking about what could occupy that barren space so we wouldn’t look like lazy homeowners.

As time passed, he considered several options but finally settled on a labyrinth after we began learning something about them, their purposes, and their meanings. We walked the labyrinths at ACU and First Central Presbyterian to get the feel for them. I enjoyed them and found them lovely, but I also deemed them highly complicated.

That very complication probably grabbed my husband’s attention. He loves a challenge that requires his abstract thinking skill as well as his ability to see patterns. I, on the other hand, lack the capacity to visualize the relationships between certain shapes. For example, as a young woman, I made many of my own clothes. I had followed my mom’s practice of buying fabric for a chosen pattern and then sewing my own garments.

I could do the sewing quite well, but I had a problem with the pattern. The pattern pieces, designed to fit onto the fabric in certain ways before cutting and sewing them together, looked like a jig-saw puzzle to me. My husband has that part of the brain I lack, so he would lay out my pattern pieces, enabling me to pin, cut, and sew.

When Mike told me his plan to build a labyrinth for our backyard, apprehension entered my thoughts. How would he possibly design a pattern, prepare the ground, obtain the materials, and actually build the labyrinth?  I shouldn’t have worried.

Over the next several months, he studied labyrinths. (I know—it doesn’t sound exciting to me either.) He produced a 24 by 24-foot square area on clay soil comprising a center with five loops, ultimately leading to the meditation area in the center.

Mike’s design includes several possible ideas for meditation as one walks the paths. For example, he includes twelve U-turns that can represent the Twelve Tribes of Israel, the twelve apostles, twelve days of Christmas, or even a twelve-step program that has benefited someone. If you add the entrance and center to the twelve U-turns to make fourteen, that equals the number of stations of the cross. The pattern includes twenty-two 90 degree turns, representing the twenty-two letters of the Hebrew alphabet as well as following the structure of Psalm 119.

Now you may ask, “Why in the world would you want a labyrinth and why would you spend the time, money, and labor to build one?” Until recent years, I could not have answered that question, but after hearing about labyrinths, seeing many of them, and walking several of them, I became aware of the significance of meditative walking that labyrinths inspire. Important to note, labyrinths and mazes differ in several ways.

Although mazes and labyrinths appear similar in that they both have many paths, a labyrinth has only one entrance and one-way paths that lead to a single destination. The maze, on the other hand, has multiple entrances, exits, and dead-end paths. Making it through a maze illustrates one’s cleverness whereas following a labyrinth encourages a mindful walk that leads to the center where one can sit, pray, think, meditate, or simply exist in the present.

In preparation for the actual work, Mike bought several 2X4s to use as frames for the walking paths. Not only does a labyrinth have the walking path, but it also includes borders to separate all the paths. He attached to the boards metal brackets that would penetrate the clay ground and provide the boundaries for the paths. David Lewis, a friend, built some small divider frames to move around as needed for particular spacing.

The materials included decomposed granite for the walking paths and a chipped stone called Black Star for the borders. Our labyrinth required one cubic yard of the Black Star and five of granite. Our truck can carry a half yard of material at a time—that weighs over half a ton. The two of us (mostly Mike) unloaded all that material from our truck into the yard, one truck load at a time. 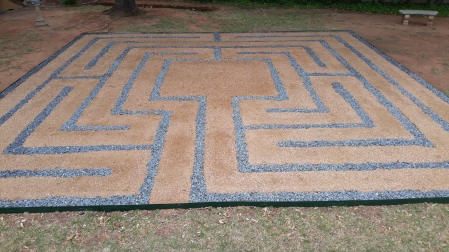 When Mike marked off the first path and showed it to me, I looked at that huge 24-foot square of dirt and thought, “Oh, no.” I couldn’t imagine that turning into a beautiful labyrinth, but I was wrong. After a period of four intense weeks of methodical spacing, clearing, measuring, and back-breaking, heavy movement of rocks and decomposed granite, we saw a lovely and tasteful labyrinth.

Although our labyrinth sits in our backyard rather than a campus or church yard, it offers a serene and lovely setting where Mike and I and our visitors might sit quietly on the Celtic bench in the center to take refuge from the distractions around us.