BE THE PERSON YOU WANT TO BE

Posted on November 2, 2019 by Loretta Fulton Leave a comment

Flash back to 2008 and place yourself on a street corner in downtown Abilene.

That’s where D Grant Smith was when an experience changed his life. Always small and insecure, Smith was standing on a street corner when he saw a rough looking, much bigger guy on the opposite corner. Smith feared that the guy was going to cross the street and beat him up, so he changed directions and ended up walking several blocks out of his way just to avoid a total stranger he feared.

That experience jolted Smith into realizing he had to do something. So he did. In fact, he did something dramatic. He joined an amateur boxing club. And that led to a word that Smith has come to embrace and has on a lapel pin that he wears and hands out to people. The word is “BE”

“The verb ‘to be’ is who you are,” Smith said during a talk Oct. 30 for the Wednesday evening program at First Central Presbyterian Church. 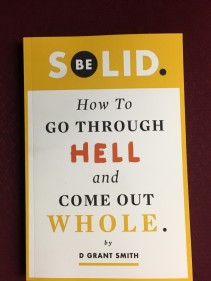 The word “BE” comes from the advice that his boxing coach gave him, “Be Solid.” And that is what Smith has learned to be, the hard way. But the painful experiences of his life, including a kid screaming at him, “You’re the ugliest kid I’ve ever seen,” have made him the solid man he is today. He has put what he has learned into a book, “Be Solid. How to Go Through Hell and Come Out Whole.” A book signing will be held at 5:30 p.m. Nov. 20 at the SoDA Courtyard, 817 S. Second St. Kirk House will perform and Smith will speak. Autographed copies can be purchased at http://www.dgrantsmith.com/books or from Amazon.

Smith, who calls himself a life/growth coach, author, and speaker, may be best known in Abilene–and beyond–for his radio program, “The Appetizer,” a mix of music genres that first aired in 2003 on KACU. The program will end in December.

Smith is hopeful that his book will help others who may be going through the same kind of pain that he went through much of his life. His small size caused him to be the victim of bullies and name-calling from kids. A divorce in 2017 ended a 12-year marriage and hurt to the core. Smith knows what he’s talking about when it comes to pain and going through hell.

“Pain can be your greatest teacher,” he said, “because it has your undivided attention.”

Smith shares his essentials for healing in his new book. Here’s an appetizer: