LIVES STARTING OUT AND FINISHING UP

Posted on November 16, 2019 by Loretta Fulton Leave a comment

At neither occasion is humor expected, but when it’s an added bonus, the comments eliciting laughter are the ones most remembered.

Current examples were separated by some 50 miles and 74 years.

Both were in churches–at a memorial service in Farmers Branch and at a parent-child dedication in Burleson.

There were many smiles–and some outright belly laughs–at the memorial service for Louis Stone, 78. He was a revered high school and college basketball star, and a renowned coach and athletic director at Richland College for 46 years.

At a height of 6-6, he excelled in basketball at Fort Worth Arlington Heights High School and at Abilene Christian University.

Family and friends weren’t surprised that Lou was remembered as much for off-the-court experiences as for his many accomplishments on the hardwood.

At our church’s parent-child dedication, the brief challenge to bring up the children in the ways they should go was expected to be “humorless” as nine sets of parents made solemn promises to do so for their dozen children, ages three and under.

The preacher extended the challenge, with “we do’s” recited both by parents and congregants signifying pledges of support.

While the youngsters didn’t have speaking parts, two-year-old Mabree Watkins didn’t get the memo.

All went swimmingly as the children were introduced. When Mabree saw her photo splashed across the large video screens in the auditorium, she went vocal.

“That’s me,” she shrieked, barely contained–or maybe restrained–in her father’s arms. She repeated the two words several times, in case some in the audience didn’t hear the first time.

Had this occurred years ago when the late Art Linkletter was “on the look-out” for kids saying the darnedest things, Mabree would have been signed up.

At the funeral, they remembered Stone’s fondness for food, and how his 6-6 frame “filled out” in adult years. One son said he had seen him consume an entire pie at one sitting.

The other son told the story about his dad’s friend who learned the hard way about sharing a half-gallon of ice cream with Stone. 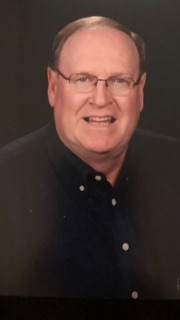 “I learned that if I wanted my half, I’d better get to the carton first,” Stone’s friend laughed.

Louis was a go-to-the-bucket type in basketball. That’s to say he was aggressive, and used his height to great advantage.

Included among friends at the service were several former teammates who recalled many “Stone stories” during the service, as well as “fore and aft.”

One said, “When I passed the ball to Lou, I never expected to get it back.”

Most accounts centered, however, on the Christian guidance he provided.

He was said to “coach life first and basketball second.”

No doubt, his folks pledged to “raise him in the ways he should go,” and then proceeded to do just that.

That’s what Louis and Janice, his wife of 55-plus years did.

Both sons also played basketball at ACU. They and Jennifer are doing well in life, reflecting positive parental influence. Hopefully, Mabree’s parents, Michael and Misti, will have similar good fortune.

My brother, Dr. Fred Newbury, is still a member of the Richland College faculty, and is now in his 47th year there. He greatly admired Stone.

Neither Fred nor I remember our parents’ proclaiming intent to set us on the straight path, but both believe they did. At age six or seven, he claimed to be from a broken home. “Most of it, I broke myself,” he joked. Our parents were married for more than 61 years, and they did the best they could with what they had.

We join others in thanksgiving for the life of Louis Stone, and wish the best for Mabree, the “That’s Me” girl in our church. She’s off to a good start.