ST. PAUL UMC ORGANIST SINGING, ‘TAKE ME OUT TO THE BALLGAME’

Click on the link above to watch Abilenian Dustin Tatro playing “Take Me Out to the Ballgame” and other baseball favorites.

Please excuse Dustin Tatro if he can’t help saying that over and over. The St. Paul United Methodist Church organist and EMT for Citizens Emergency Medical Service has added a Rangers baseball cap to the other hats he wears. The news was so exciting to St. Paul pastor Steve Patterson when it was made official that he led the congregation in the familiar “CHARGE!” normally heard only at the ballpark. For Tatro, this latest addition to his resume is a dream come true.

“I’m probably one of the biggest Texas Rangers fans you could find,” he said. 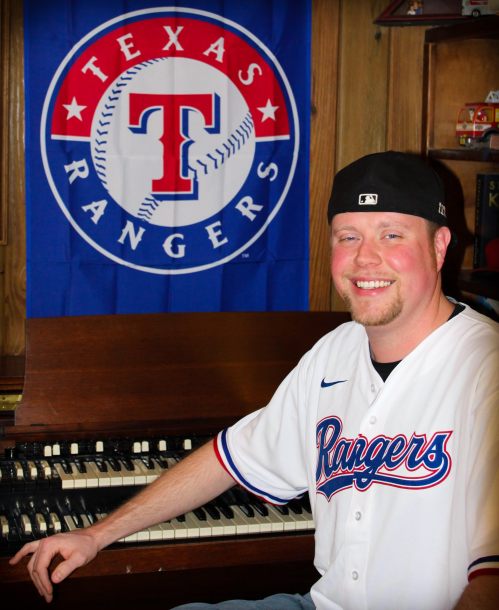 Tatro will remain in Abilene and juggle all his jobs. That’s a relief to Patterson and all the folks at St. Paul. Finding a new organist would be difficult. As soon as Patterson breathed a sigh of relief that Tatro wouldn’t be leaving, he had a word of advice for him.

“You know,” he said in a soothing preacher voice, “you’re going to have to have pastoral support when you go.”

Of course, Patterson volunteered himself to go along with Tatro on trips to the Rangers’ new Globe Life Field whenever it opens.

Growing up in Andrews, Tatro loved baseball but he had to give up Tee-ball after two seasons due to the demands of piano lessons and school work. But now he’s hit it out of the ballpark.

“I’m pretty sure this is the only way I would have made it to the big leagues,” he joked.

Dustin Tatro as a member of the Astros Tee-ball team, long before being named organist for the Texas Rangers. Contributed photo

Tatro, who used to have a program on Abilene’s KGNZ Christian radio station, didn’t even have to audition for the Rangers gig. He was asked by Chuck Morgan, Rangers executive vice president for ballpark entertainment and production. The two knew each other through Facebook connections.

Last October, Morgan contacted Tatro on Facebook Messenger about the gig at the new Globe Life Field, where the Rangers were scheduled to kick off the 2020 season before the coronavirus pandemic shut down Major League Baseball and all other sports. The message from Morgan came out of the blue.

“He just contacted me and said, ‘Do you want to do this?’” Tatro said.

That was a no-brainer. In January, Morgan and two other representatives from the Rangers came to Abilene to meet Tatro in person for the first time and to hear him live, not just online. Originally, Tatro planned to take the Ranger representatives to his house where he has a restored 1951 Hammond organ. He took them there eventually, but the schedule changed because Tatro wanted the three men to hear the Star-Spangled Banner on the pipe organ at St. Paul. It was a wise decision.

“Their jaws all hit their chests simultaneously,” Taro said.

He wanted the Rangers representatives to hear how dignified the National Anthem could sound on a pipe organ. When Major League Baseball returns to normal, Tatro sometimes will play the National Anthem live at the ballpark as an accompaniment to a singer. Other times, fans will hear a version of the anthem that Tatro already has recorded  on the St. Paul pipe organ.

The new Globe Life Field doesn’t even have an organ installed yet. When the time comes, a custom digital theater organ will be installed and will produce the sound familiar to baseball fans everywhere. Tatro got a tour of the ballpark under construction and got to stand in the exact spot where he someday will play the organ.

Tatro will have to commute to Arlington as much as his St. Paul and EMT schedules will allow. The rest of the time, fans will hear tracks that Tatro recorded at home on the restored 1951 organ that came from Lamar Street Baptist Church in Sweetwater–his wife’s former church.

Tatro has recorded more than 500 tracks, ranging from traditional baseball music like “Take Me Out to the Ballgame” to Texas country to rock and hip hop. He also recorded an adaptation of “Ode to the Texas Rangers,” which was popular at the original Arlington Stadium from 1975 to 1980. And, of course, there’s the familiar “CHARGE!” battle cry.

Dustin Tatro of Abilene stands in the exact spot where he will play the organ for Texas Rangers games when Major League Baseball begins its season. Contributed photo

The Rangers have had only three organists since starting play in Arlington in 1972 and none since 2001. Fans have been listening to recorded music and rally cries since then, but a trend is developing, Tatro said, toward having an organist at all Major League ballparks as often as possible.

Tatro grew up in Andrews but has strong Abilene ties. He earned a bachelor’s degree in church music, with an organ emphasis, from Hardin-Simmons University in 2011 and a master’s in 2013. He has been a guest organist for several Abilene churches, in addition to his position at St. Paul UMC. While studying for his master’s, Tatro earned an emergency medical technician certification.

Since then, he has had a radio gig, television gig, and church organist gigs, in addition to his job as an EMT. He’s used to working long, and odd, hours, so he figures one more job won’t hurt. And, besides, what former Tee-baller, even an Astros Tee-baller, could possibly pass up the opportunity to play the organ for the Texas Rangers?

“I have to pinch myself every morning,” Tatro said. “I feel like it’s a dream somebody is going to wake me up from.”