Kululu Atsiaya was 10 years old before he got his first Chrismas present, but boy was it a good one.

The box came on Christmas Eve 1995 but his mother would let him open it until Christmas morning. However, staring at it wasn’t forbidden.

“She did not tell me I could not look and admire,” and that’s what Kululu did, admiring the box but obeying his mother and waiting until Christmas morning to open it. 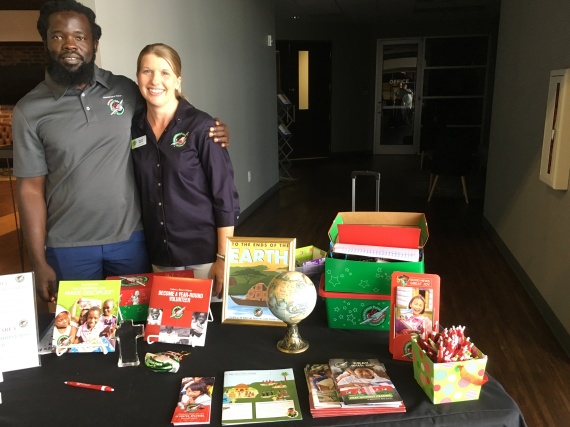 The first thing he saw when the box arrived was the Operation Christmas Child logo, featuring a wrapped Christmas box with wings extending from either side. The logo symbolizes that the Samaritan’s Purse project is international. It also gave little Kululu Atsiaya something to dream about–becoming a pilot and dropping Christmas presents for children all over the world.

He hasn’t realized that dream yet, but Atsiaya did make it to the United States from a Nairobi, Kenya, slum. He has earned a bachelor’s degree and still aspires to become a pilot. Don’t count him out. Atsiaya was guest speaker for three gatherings over the weekend to promote Operation Christmas Child through his inspiring message.

Each year, local churches join others worldwide to pack shoeboxes for boys and girls worldwide who otherwise wouldn’t get presents. Children like Kululu Atsiaya. He was brought to Abilene by Naomi Wood, a member of Wylie United Methodist Church and area coordinator for the Texas-Louisiana Region of Operation Christmas Child.

OPERATION CHRISTMAS CHILD
November is a long way off, but it’s not too early to think about packing boxes for Operation Christmas Child. The annual collection week is in November. Aldersgate United Methodist Church is having kids pack boxes as part of the Vacation Bible School experience in July. For other ideas and to participate, contact are coordinator Naomi Wood at 660-5633 or abileneareaocc@gmail.com For more information, check out the organization’s Facebook or Instagram page.

At his first presenation, Atsiaya told of growing up in a slum in Nairobi, often going without food. Some nights he would go to bed hungry as his sisters mysteriously left and didn’t return until morning. When they did return, they brought food they had purchased with money earned overnight.

The only way for Atsiaya to make something of himself in those circumstances was to was join a circle of thieves, but his sisters sacrificed their bodies and their self-esteem so he wouldn’t have to become a thief.

In school, Atsiaya was bullied. He had a learning disability and others made fun of him. It wasn’t until the Christmas box arrived that he felt hope. His mother reinforced that feeling.

“Son, she said, “someone somewhere loves you.”

The box had “The American smell,” Atsiaya recalled. Everything was new, including the box itself. It contained a new pencil and new book–firsts for Atsiaya. It also contained a small flashlight, something cherished by a little boy in a home with no electricity.

“The light became my friend,” he said.

From then on, Atsiaya was determined never to be a thief but to respond to the love of the people who cared enough about children all over the world to pack a Christmas box for them. He learned that those people were Christians and through their act of kindness, he learned that Jesus knew his name.

“It totally changed my life,” Atsiaya said. “Your sacrifices are going to make the world a better place.”