Fred Rogers, make that “Mr. Rogers,” died in 2003, but he will never be forgotten. One of Rogers’ biggest fans lives in Abilene and will present a program on the man and his television show, “Mr. Rogers’ Neighborhood,” on Wednesday. 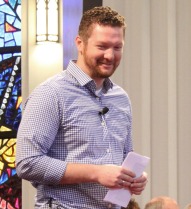 Jacob Snowden, director of Christian education at First Central Presbyterian Church, will give a program Wednesday, Aug. 22, on Rogers for the August meeting of the Abilene Association of Congregations. The public is invited. The meeting will be held in the parish hall at the Episcopal Church of the Heavenly Rest, 602 Meander St. Parking is available on the South Seventh side of the church. Lunch, which is available for $3, begins at 11:45 a.m., followed by the program at noon.

Like Snowden, Rogers was an ordained Presbyterian minister, but he was best known for his television program which was televised from 1968 to 2001. Rogers was the creator, composer, producer, head writer, and host of the show.

Snowden presented the Mr. Rogers program at First Central Presbyterian last fall as part of the church’s Wednesday night programming. Pastor of the church and president of the Abilene Association of Congregations, Cliff Stewart, was impressed and believes others will be, too.

“This is one you don’t want to miss,” Stewart said in an email. “I am convinced that Mr. Rogers is one of the saints of our time.”